Take a Ride on the #77 McDonnell Lindbergh 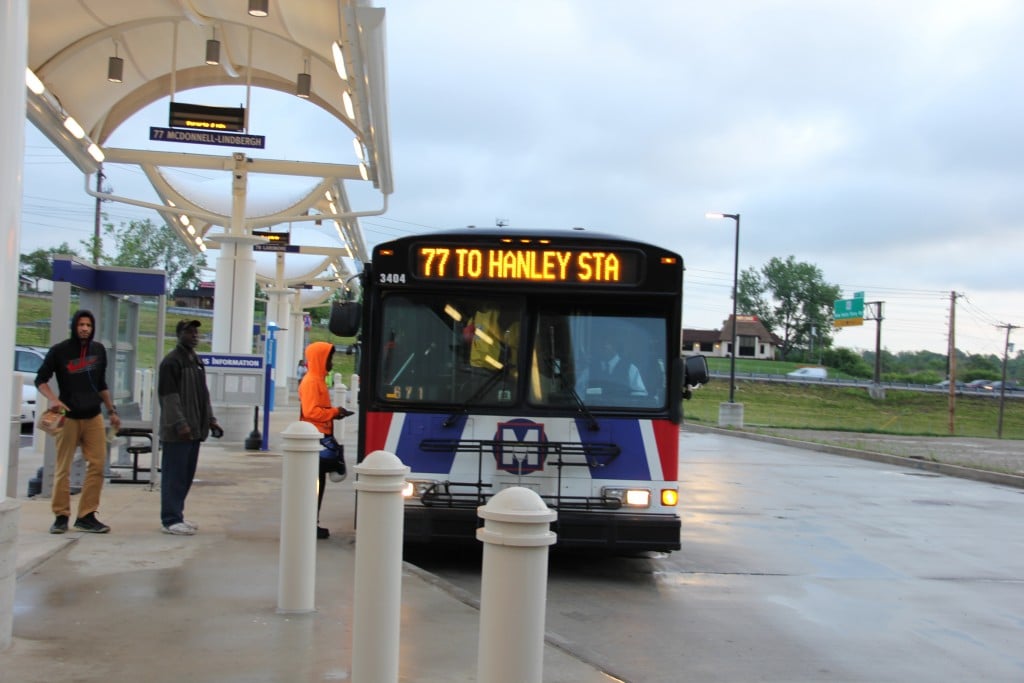 The #77 McDonnell Lindbergh connects the North County Transit Center and the North Hanley MetroLink Station, and provides passengers with access to major employers like the Centene Corporation, Boeing and Express Scripts, and to residential communities and commercial corridors along New Halls Ferry Road, Lindbergh Boulevard and McDonnell Boulevard.

Each morning, the #77 McDonnell Lindbergh heads east from the North County Transit Center before turning north on New Halls Ferry Road, where it passes by large retail stores and gas stations near Interstate 270.

The bus makes a left on Seven Hills Drive to serve the Missouri Department of Social Services before returning north on New Halls Ferry Road. The view outside the #77 McDonnell Lindbergh is mostly filled with homes and a few neighborhood churches nestled in between.

At the intersection of New Halls Ferry Road and Lindbergh Boulevard, the bus passes by two large shopping centers – The Shoppes at Cross Keys and the Flower Valley Shopping Center. It’s here that a McCluer North High School student gets on the bus. She’s been riding Metro since 2015 and uses the #77 McDonnell Lindbergh route primarily to get to and from school each day. In addition to school, she plans on using Metro to get her to and from soccer practice this summer.

As the #77 McDonnell Lindbergh continues south on Lindbergh Boulevard, it passes by stores, restaurants and neighborhoods, picking up and dropping off passengers headed to work and school. Before the bus reaches the intersection of Interstate 270 and Lindbergh Boulevard, it circles into the Village Square Shopping Center, which is home to both the St. Louis County Government Center and St. Louis County Family Court.

From there, the scene outside the #77 McDonnell Lindbergh changes from commercial and retail to logistics and shipping as the bus travels closer to Lambert-St. Louis International Airport. The bus turns left onto James S. McDonnell Boulevard and is soon surrounded by companies that support the aeronautics and defensive workforce, mostly notably Boeing and GKN Aerospace. The large freight planes of FedEx and UPS come into view as well.

As the bus continues toward its final destination, it enters the NorthPark business park via Airport and Hanley Roads. The business park includes more than 1.2 million square feet of development with 11 businesses, including the corporate campus of Express Scripts. 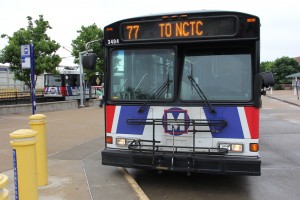 The #77 McDonnell Lindbergh makes its final stop at the North Hanley MetroLink Station, where many passengers get off the bus to make connections to MetroLink or 11 other MetroBus routes serving the station. This is where Ken boards the bus.

Ken has been riding Metro for a long time and is currently relying on MetroBus while his car is in the shop. Ken works for Mid-USA Motorcycle Parts in Hazelwood, right along the #77 McDonnell Lindbergh bus route. To get to work, he boards a bus in The Hill neighborhood of St. Louis and travels to the Central West End MetroLink Station. From there, he rides a Red Line train to the North Hanley MetroLink Station where he boards the #77 McDonnell Lindbergh. He said his commute to work takes about 90 minutes.

The #77 McDonnell Lindbergh then turns around and begins its trip back to the North County Transit Center, so it can once again visit all of the important commercial, business and residential destinations along its route that provide passengers with the opportunity to work, shop, eat or to have a place to call home.