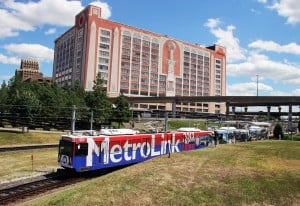 It’s been 18 years since Garth Brooks has performed in St. Louis, but the country superstar returns tomorrow night to kick off a series of four sold-out concerts at the Scottrade Center.

If you want to avoid the construction, traffic jams and parking challenges downtown, then take Metro to get to the Scottrade Center for these concerts.

The closest MetroLink station is the Civic Center MetroLink Station which is right across the street, to the south of the Scottrade Center. The Union Station MetroLink Station is also a short walk to the Scottrade Center, located only a block and a half west.  MetroBus is another option with more than a dozen MetroBus routes serving the Civic Center Transit Center. To plan your route to the concerts, use our handy Trip Planner tool.