It’s almost time for turkey, football and family! If you are heading downtown tomorrow morning for the Ameren Missouri Thanksgiving Day Parade you can avoid the hassle of traffic and parking by taking Metro.

The Parade starts at 8:45 a.m. at N. 4th Street and Washington Ave. It heads south on 4th and turns west down Market. The parade concludes at Market and 10th. 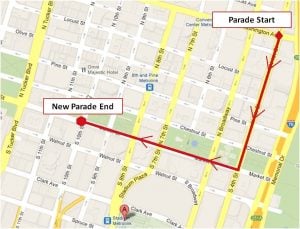 MetroLink is also a good alternative to driving. Just hop off at any of four downtown MetroLink Stations—Stadium, 8th & Pine, Convention Center, and Civic Center.