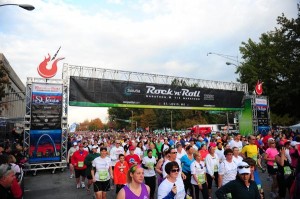 The Rock ‘n’ Roll Marathon Series will return to St. Louis for the fourth time Sunday. Marathon participants and observers who want to bypass street closures, traffic congestion and parking in downtown St. Louis, can park free at any Metro Park-Ride lot in Missouri or Illinois and take MetroLink downtown.

The Civic Center, Stadium and 8th & Pine MetroLink Stations are located within a few blocks of the starting line (Market Street west of Tucker) and the finish line (Chestnut and North 15th Street). MetroLink schedules can be found on our website. Schedules for MetroBus routes that serve the Civic Center Station can also be found on Metro’s website.

The event will significantly impact MetroBus routes from downtown St. Louis to Carondelet Park, and points in between. The Grand MetroLink Station will be OPEN but will not be served by the #70 Grand MetroBus route Sunday morning.Customers will need to board the #70 Grand at the Central West End Station, in the #95 Kingshighway bus bay from 6 a.m. to 11 a.m. To accommodate the marathon runners,several MetroBus routes will be rerouted.

Specific details and individual maps for each reroute can be found at on our Rider Updates & Alerts section. MetroBus customers should allow extra travel time for their commutes Sunday to allow for the detours.