There are several St. Patrick’s Day events coming up and you could be testing your luck finding a parking spot downtown. Avoid the hassles of parking, closed streets and traffic jams and take Metro. 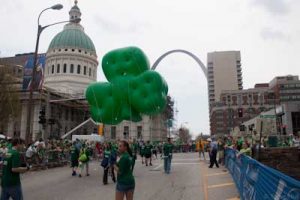 Before you head downtown for the St. Patrick’s Day Parade Run at 9 a.m., park at one of our free Metro Park-Ride lots in Missouri or Illinois and take MetroLink to any of our five MetroLink Stations downtown. The 5-mile run is one of the largest in the St. Louis area, with more than 13,000 participants, according to The Metropolitan St. Patrick’s Day Parade Committee website.

The annual St. Patrick’s Day Parade,  one of the nation’s largest and most attended parades, will start at noon. The parade will begin at 18th and Market Streets and proceed east to Broadway and Market Streets. The Union Station, Civic Center, Stadium, and 8th and Pine MetroLink Stations are all within two to three blocks off the Market Street parade route. The Convention Center MetroLink station is about six blocks north of Market.  All are within a short walk to the parade.

We’ll monitor the MetroLink platforms Saturday and will add service, if needed. As a reminder, no alcohol is permitted on Metro property or on Metro vehicles. 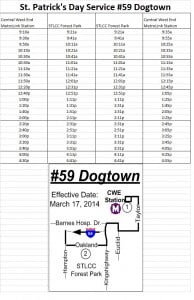 The Ancient Order of Hibernians St. Patrick’s Day Parade will be held on Monday, March 17 at 12:30 p.m. in the Dogtown neighborhood of St. Louis. The parade will impact the #32 Martin Luther King- Chouteau, #59 Dogtown and #90 Hampton MetroBus routes, which will be rerouted due to the street closures.

A shuttle will be added from Central West End MetroLink Station to Forest Park Community College from 9 a.m. to 5 p.m. on Monday. The shuttle will run every 20 minutes. (View the shuttle schedule and map on the left.)

If you plan to attend the St. Patrick’s Day festivities downtown or the Hibernian St. Patrick’s Day Parade in Dogtown, we want to see the green! Take a photo of your green attire aboard our transit vehicles and share it on Twitter and Instagram. Make sure you use the hashtag #stlmetro and include @stlmetro in your posts!

Have a happy and safe St. Patrick’s Day weekend!