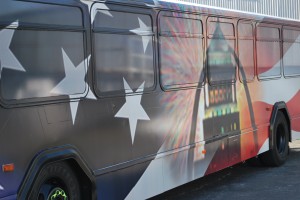 Veterans Day is on Wednesday, Nov. 11, but St. Louis is celebrating early with a parade in downtown St. Louis this weekend.

The Veterans Day Parade will be held on Saturday, Nov. 7 and will travel on Olive Street between Tucker Boulevard and Jefferson Avenue. At noon, the parade will proceed south on Tucker, west on Chestnut, south on 14th Street, west on Market to Union Station and end at 20th Street.

You can park at any one of 21 free Metro Park-Ride lots in Missouri and Illinois and take MetroLink to the Civic Center MetroLink Station for easy access to the parade route. MetroBus is another great option with more than a dozen MetroBus routes serving the Civic Center Transit Center.

To plan your route to the events at Soldiers Memorial, use our handy Trip Planner tool.