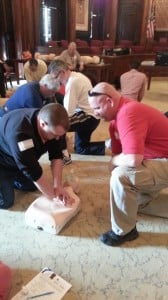 Here at Bi-State Development Agency/Metro employees know Firefighter Terry Bowman Jr. as the person who taught them CPR and first aid training at the Saint Louis Downtown Airport, but that’s just one of the many things he does for the airport and the agency.

Terry has taught CPR and first aid training for four years. Since 2012, he has conducted 29 classes for more than 200 Bi-State Development Agency/Metro employees. The agency owns and operates the St. Louis Downtown Airport, located in Cahokia and Sauget, Illinois.

“Teaching CPR has become a passion for me because I enjoy teaching people skills that could save the life of a co-worker, family member, or even a stranger on the street,” Terry said.

Terry also travels every year to the Illinois state capitol building to teach CPR training to staff members. He helps teach between 100 to 150 volunteers CPR training.

He said it’s important for him to teach CPR to staff members so that they are more prepared to save a life in the future. In fact, Terry said the group he helps assist in CPR training saved one life already a year after the class was conducted. 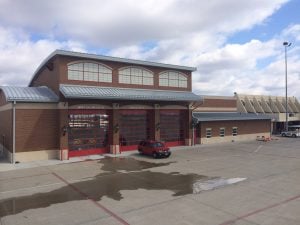 Terry was of the first of three firefighters hired on when the fire department first came on line in July 2008. He said being a firefighter at an airport does bring its special characteristics.

“First of all, you need to be a well-rounded structural firefighter (working the city streets) and then be trained in the skills of an airport firefighter,” said Terry. “Airport firefighting requires special training to handle emergencies involving aircraft and operating airport rescue and firefighting trucks that are very different from regular fire trucks.”