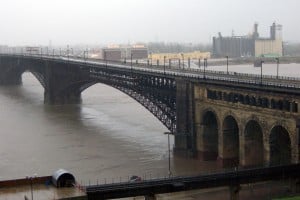 A MetroLink train stays momentarily dry in the Eads Bridge. Pic taken today from the sixth floor of Metro Headquarters in Laclede's Landing.

Anybody notice that it’s awfully wet outside these days?  We’ve gotten a LOT of rain this fall, and when it rains, it pours on challenges for transportation.  Anybody who’s gotten stuck in traffic after a rainy-day collision or rode home soaking wet on a bike knows that when we have inclement weather in St. Louis, getting around can be a pain.  Some of the problems of bad weather don’t affect MetroLink, like increases in traffic.  But rainy days pose their own unique problems for light rail, and MetroLink maintenance employees have to double as “storm watchers” on the worst days to monitor opportunities for damage (and you thought only your dad liked the Weather Channel!)  I asked MetroLink trainer Suzanne Whitehead and Metro Power Engineer Bill Wood about what we look out for on our wettest days.

1.  Flood on the tracks. It’s not very common, but it can happen.  And when it does, it poses a serious risk to the light rail vehicles’ electrical systems.  When flooding occurs, the train must stop or risk damaging thousands of dollars worth of the vehicle’s electronics.  Rail beds are elevated to help mitigate flooding, and problems must be investgated very quickly.

2.  Look out for fallen trees! When the weather turns bad and the wind picks up, tree branches sometimes fall onto tracks.  When they do, they must be removed immediately for fear of damaging vehicles or becoming a safety hazard.  According to Suzanne, Metro’s rail maintenance team has put a lot of effort in the last two years to trim back trees to prevent branches falling onto MetroLink’s path.  But when the wind picks up, crews stand on guard to quickly remove matter from the tracks.

3.  Lightning crashes. During lighting and thunderstorms, electrical surges from lightning strikes threaten the catenary wires suspended above MetroLink tracks.  These wires deliver the electricity that runs MetroLink.  So all along the alignment are lightning arrestors.  Without these arrestors, large sections of MetroLink track could be vulnerable to shutting down during lightning storms.

Here’s how the arrestors work.  Normally, electric charges enter the top of the arrestor through a wire, and exit through the bottom.  When the charge gets too high (such as that of a lightning strike) the arrestor’s sensors cause it to  self-destruct, separating that part of the circuit with the rest of the system.  The surge of energy is then diverted to the ground. 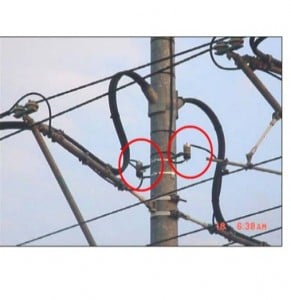 Aren’t you glad your home computer surge protector doesn’t work like that?  But these kamikazee protectors keep sections of MetroLink operational, even in lightning storms, and protect our passengers and vehicles.

Unfortunately, none of these provisions will remove clogged leaves from your gutters or provide a much-needed dose of Vitamin D, but hopefully will help keep your rainy commute running as smoothly as possible.