“The Trolley Song” from Meet Me in St. Louis

St. Louis has a rich history of streetcars.  The St. Louis Car Company, existing from 1887–1973, was considered the largest streetcar builder in the world.  But with the advent of automobiles came a decline in ridership in the 1920’s, along with lobbying from car and tire manufactures to promote private transportation, streetcar lines started fading out.  The construction of Highway I-70 threatened and ended service to many street lines.   The last St. Louis streetcar route ended May 21, 1966 on the Hodiamont line.

But today, streetcars are back in vogue, thanks to changes in transportation preferences and successful streetcar lines developed in Portland, Denver, Charlotte and Salt Lake City.  Now at least 40 transit agencies are looking at streetcar plans to spur economic development and revitalize urban cores.  We have our own trolley project in the works, St. Louis Trolley Project, to restore streetcar service to the Delmar Loop area.

After their popularity dwindled in the U.S., streetcar manufacturing moved out of the U.S.   All modern streetcars in use in America were manufactured in other countries.  Until last week, when the first American-made streetcar in almost 60 years was unveiled to the public. United Streetcar LLC and their parent company, Oregon Iron Works, manufactured the streetcar, which cost $2.9 million and created 90 jobs for the Portland area. 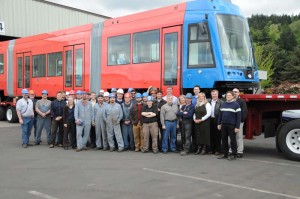 This is a great development for U.S. manufacturing, and a hopeful example for this century’s possible “green jobs” sector.  Portland has already ordered six more streetcars and Tuscon has placed a $26 million order.  As this trend continues to grow, what other cities will take advantage of increased U.S. demand?  Could St. Louis restore its historic glory as the center of streetcar manufacturing?

5 thoughts on “The Future of U.S. Streetcar Manufacturing – St. Louis?”