I’ve just returned* from a trip to Europe to visit my dad and one of the things I enjoyed the most was how easy it was to get around the cities I was visiting without having a car at my disposal. I hope to publish a few posts pondering the differences of European transit vs. American transit, but for now, an overview.

My dad lives near Waterloo, Belgium (yep, that one), and very affordable commuter trains run every five minutes or so, day & night, into nearby Brussels. There are also express buses into the city and a network of buses around the little villages and to the train station. Within Brussels, there’s street-running light rail, buses, and bikes; and the city itself is very walkable, with wide, pedestrian-friendly sidewalks and good crossings. 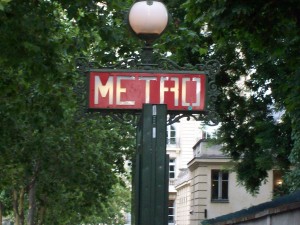 We also visited Paris, known for having one of the greatest public transit networks in the world, and for good reason – if you’re in the city, you’re never more than a ten-minute walk from a Métro station (and in fact, we were usually much closer than that). The trains are frequent, they go everywhere, and they are easy to use and very affordable. We stayed five days in Paris and never had any trouble getting anyplace, no matter the time of day. Every street we saw was crammed with cars sitting in traffic, but we whizzed along underground with no delays, no matter what the surface streets looked like. The stations are works of art in themselves; each one was different and reflected the character of the surrounding neighborhood. And the trains were busy all day long, with a mixture of locals and obvious tourists. 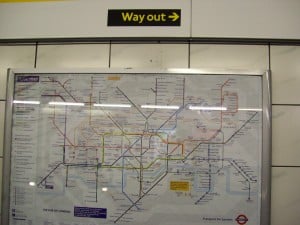 We spent a very short time in London as well, and there too the subway system (the “Tube”) is top notch (although it took longer to get from stop to stop; I think the trains run slower but can’t say for sure). We also rode some of the famed double-decker red buses, and they were very prompt and had monitors at the bus shelters displaying real-time schedule information. The Tube was very easy to use, with great signs that helped point the way for people transferring from one line to another in each station. I did notice that the signage scheme for the Tube was very similar to the one used in Paris, which means someone familiar with one system should have no trouble figuring out the other. The signs were easy to understand even with a language barrier –  very simple & visual.

Even the smaller cities we visited, though, had excellent transportation. In Ghent, I snapped a photo of an accordion double-length bus stopped with a horse-drawn carriage waiting behind it; Ghent also has street-running light rail, cabs, cars, and the inevitable bicycles. 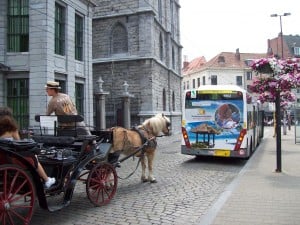 Bruges is another great example – there’s a train station very close to the center of town, taxis abound, buses run everywhere, and there are hundreds, maybe even thousands, of bikers everywhere. (More on that later.) We rode a train from Braine-l’Alleud to Bruges, transferring in Brussels, and even speaking only minimal French, my sisters and I were able to easily navigate the system and get ourselves to the right place at the right time.

This was my first (and possibly only) visit to Europe, but it certainly lived up to its reputation as a very transit-friendly, walkable, car-free place to visit. I hope I get to go back someday and spend more time there – now that I know how to get around, traveling will certainly be a snap!

*My recent posts were written before I left and scheduled for publication, which is why I haven’t been very responsive in the comments. But thanks for some great discussions while I was away!