Up to Speed: September Project Updates

Eads Bridge Rehabilitation, Real Time MetroBus Arrival Data, Downtown St. Louis Transit Center, New MetroBus Fareboxes, and North County Transit Center.  Through regular blog updates, we are going to start bringing you– our customers, our stakeholders, our employees, and the St. Louis region– up to speed on what we are doing to build a better transit experience. We are working hard every day on many projects throughout the agency and it’s important that you know what’s happening behind the scenes relating to Metro operations as well as the current status of capital projects. 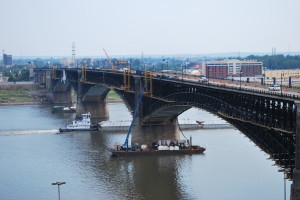