Where do you want restored public transit service? 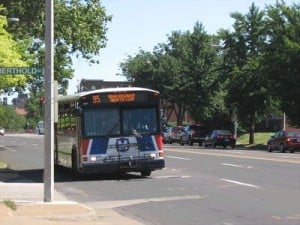 At the end of their spring session, the Missouri legislation voted to approve a one-time emergency appropriation from the Federal Stabilization Fund. This money will allow Metro to restore 1/3 of the $35 million in service that was discontinued on March 30. It won’t bring back all the bus routes or Call-A-Ride service, and it doesn’t permanently fix our funding problems, but it will allow us to restore a portion of what was lost. When Governor Nixon signs the bill into law, restored service may begin as early as August.

What will the new service be like? Where is Metro now?

Details of the proposed partial service restoration plan are on Metro’s website. Under the proposed plan, more people will have access to Call-A-Ride.  Some buses will run more frequently, some buses that were discontinued will come back, and several new routes will be introduced, including a bus line that will circle downtown St. Louis.

Planning transit service is a dynamic process: some parts science and some parts art. The Planning Department considers a number of variables, like: How many people along this route ride public transit? What job centers are located in this area? Which buses are now overcrowded? How much does the average passenger trip cost the Agency? How many more people are eligible for Call-A-Ride paratransit service if a bus route is restored? The planning process is very heavy on statistics and marketing research. The very thought of the depth of information makes my forehead sweat, and makes me grateful that it is not part of MY job description.

But we also rely on input from riders. There are always stories, thoughts that won’t be picked up from a spreadsheet. We need feedback to build the type of public transportation system that St. Louis wants and needs. Where do you want to go? What aspects of your bus route do you miss? Do you know someone who has problems getting to work or the doctor since the service cuts?

If you could create your ideal bus route, what would it be?

9 thoughts on “Where do you want restored public transit service?”