Why Not Bike Lockers? (Updated)

Instead of “Bike-share Vending Machines”, how ’bout just some simple bike lockers at suburban metrolink stations, available for daily or monthly rentals?

I thought that was a good question, so I spent some time thinking about it, and here’s my answer: Why not both?Denver, where Jimmy is from and which has a bike locker-rental system run by the RTD, is also putting in bike share bikes:

Why both? Because one of the problems MetroLink has is capacity for bikes. For good or for ill, MetroLink LRV’s don’t have on-board bike racks, so according to Metro St. Louis’s website:

You should board MetroLink with your bicycle in the rear open area of the first car or the front or rear area of the second car. Do not use the kick stand or leave your bike for any reason. Only one bike will be allowed in each area.

That’s not a lot of room for bikes on the train, and at rush hour, it gets quite packed in some places where there are a lot of bikers. On the other hand, riding your bike (rather than driving) to the MetroLink station makes great sense. Locking your bike in your own personal bike locker is a great idea too – but what if your end point destination is far enough from your MetroLink stop that you want your bike available at the other end? That’s when bike-sharing starts to make sense. If the areas to which most bike-and-train users are commuting have bike-share bikes, then people could lock up their bikes at the suburban stations and use bike-share bikes to take them the last miles to their end-point destinations. Maybe you could even offer combo prices for people who use both services, as an incentive.

Another idea is to have a “downtown” bike and a “home” bike, such that you’d have one you use at home & for your morning commute, and another junky bike you’d just ride around from the MetroLink station to work (and at lunchtime). Don’t laugh – I knew people in Portland who did that. 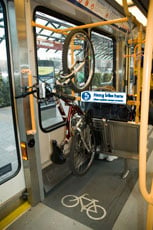 And speaking of Portland, I think it serves as a great example of why taking your bike with you on the whole trip may not be the best solution. TriMet trains have bike hooks where you can suspend your bike, which is great for long commutes. I mean, look at that photo – doesn’t that look like a nice solution?

I was never a nine-to-fiver in Portland; being a grad student, I kept odd hours. In all the times I took the Max Light Rail, even keeping my odd hours, I never once was able to use the bike hook – they were always filled. What’s more, during rush hour, it is a battle to get one’s bike onto the train with all the people. During Portland rush hour, it is also hard to catch a bus that doesn’t already have two bikes on the rack. Sometimes I would wait for two or three buses to pass before I saw one with free rack space. Granted, that’s Portland – tons of bike commuters. But if we’re working towards a more bike-friendly St. Louis, and we don’t want to waste money, isn’t this the kind of thing we should think through first?

If you’ve ever used the Central West End MetroLink Station during rush hour, you know how full the trains are every day. Special events and certain stations make crowding a lot of bikes onto MetroLink impractical and inconvenient. As the number of bike commuters increases (as I believe it inevitably will, alongside fuel price increases), we want to make biking and transit more practical, safe, and convenient for everyone.

(Update: This thread is carrying on both here and on the original MetroLinks post from last week, if you want to see what other people are saying.)

5 thoughts on “Why Not Bike Lockers? (Updated)”