Why We Invest in Public Art in Transit 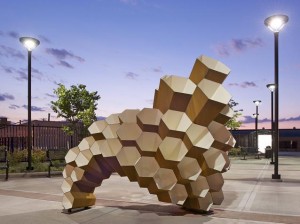 Last night, a story on KTVI discussed the installation of two public art pieces at MetroLink’s Delmar and Richmond Heights stations, asking why Metro had spent money in that way. We tackled this question last October when Metro President and CEO Bob Baer was interviewed for the story, and we did a short video about the Hive artwork at Delmar.

But we think the answer to the question of why we install art at transit stations is relatively simple: It’s required as a condition on the funding we get through the Federal Transportation Administration (FTA) and it’s a valuable way to enhance public transit as a vital part of our community.

Under the Transit Enhancements Section of FTA regulations, a transit agency in a region with a population of 200,000 or more must spend at least 1 percent of the federal funds it receives on projects that enhance transit activities. While one percent is the FTA minimum, communities often spend more to ensure that transit enhances, rather than detracts from, the urban landscape. The FTA requires that level of spending because it believes the visual quality of the nation’s public-transit systems has a profound impact on transit customers and communities at large. Public-transit systems should be positive symbols for cities to attract local riders, tourists and the attention of decision-makers for national and international events. Good design and art can:

•    Improve the appearance and safety of a facility
•    Give vibrancy to public spaces
•    Make customers feel welcome
•    Contribute to the creation of livable communities.

How does art help accomplish that?

•    More attractive spaces add value to the homes and businesses around the transit plazas
•    People take better care of more attractive spaces, which reduces the cost of repairing vandalism
•    It attracts customers, adding to a sense of safety and comfort while using the space
•    Regions enhance their public spaces to attract tourism

An added bonus is the financial impact on the community through the employment of local engineers and fabricators used on the projects.
Let’s look at how much was spent on the Hive sculpture at the Delmar Transit Plaza in July 2009.

How much was spent on the Mime sculpture at the Richmond Heights MetroLink Station in July 2009?

These artworks are installed across Metro’s system by our Arts in Transit program, which began in 1986 to coordinate the efforts of artists, engineers and architects in the design of the MetroLink light-rail system. It has since installed many public art pieces, as well as developed a curriculum guide for teachers, coordinated ongoing community projects, and installed literary works in buses and trains.

Questions about our public art in transit? Leave your comments below.

15 thoughts on “Why We Invest in Public Art in Transit”