A new type of public transit service called Bus Rapid Transit (BRT) is being explored by Metro and regional partners — the Missouri Department of Transportation (MoDOT), East-West Gateway Council of Governments, City of St. Louis, and St. Louis County. The partnership is conducting the St. Louis Rapid Transit Connector Study and is requesting your input online through September 13 and at public meetings scheduled for September 10, 11 and 12. The mission is to expand transportation choices and improve connections between residents and jobs.

“By providing high-performance transit services to more communities, we can maximize the potential not only of our transportation network, but of our residents and businesses as well,” said Ray Friem, Metro Chief Operating Officer Transit Services.

Over the past several months, the project team has studied a variety of factors including demographics, land use and employment patterns, regional travel demand, existing transit usage, known transit needs, and best practices in transit operations from around the country.  Community input received during public meetings earlier this year helped guide initial recommendations for potential routes and service features.

At this point, the project team has identified four potential projects that present the best opportunities for meeting the study’s goals in the near future.   These four options, depicted in the map above, will be further refined based on public feedback and additional analysis.

All four corridors could be served by a new type of transit service – Bus Rapid Transit (BRT).  BRT has proven successful in many cities across the United States, including Cleveland, Denver, Seattle, and Kansas City.  BRT is designed to provide a fast, comfortable, and convenient alternative to cars, as well as a faster and more frequent “mainline” connection for local bus routes.  BRT systems use high-frequency service, limited stops at dedicated stations, and transit prioritization strategies to provide a rail-like level of service using bus vehicles.  BRT routes operate frequent service throughout the day and in both route directions, though buses may run somewhat less often outside of peak travel times.

During public meetings held earlier this year, participants expressed a desire for easier access to more key destinations, more frequent service, and more comfortable bus stops. All of the possible options seek to meet those needs. 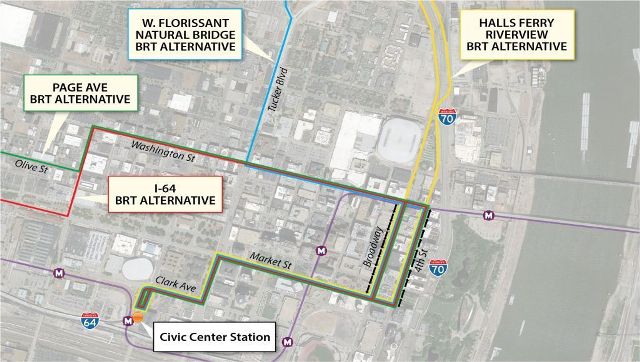 “We want the community, both those who rely on transit and those who may be interested in riding under the right conditions, to realize this service offers something different, something new,” Friem said.  “We’re aiming for services that will operate often and at regular intervals throughout the day, both to and from Downtown St. Louis, so that people don’t have to rely on a schedule. With direct routes, limited stops, comfortable stations, and faster travel times, in many ways BRT would operate more like MetroLink than a typical MetroBus route, but in a more cost-effective manner for long corridors stretching through both St. Louis City and St. Louis County.”

You are invited to visit the study’s website to learn more about the four options and to participate in the online survey to help evaluate them. Your online input will be  accepted through Friday, September 13.  Based on community feedback and additional technical analysis, two “finalist” projects will be selected to compete for federal funds.  The two recommended projects will be presented to the community at public meetings scheduled for September 10, 11, and 12, where you will be asked to provide additional feedback on the corridors, service strategies, and station amenities.

The St. Louis Rapid Transit Connector Study is a an examination of bus-based rapid transit services to better connect people to jobs, schools, and all the needs of daily life in the City of St. Louis and in St. Louis County.  The project will analyze four possible corridors before narrowing it down to the two most likely to meet the study’s goals and successfully compete for federal funding.   Metro and its study partners are optimistic that projects identified by this study will attract funding to support implementation over the next few years. Study partners include the Missouri Department of Transportation, East-West Gateway Council of Governments, City of St. Louis, and St. Louis County.