Youth Aviation Programs At St. Louis Downtown Airport Rewarding For Girls and Boys And All Involved 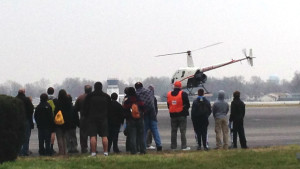 Scouts watch a helicopter take off.

Educating boys and girls about aviation  opportunities and careers is a priority for the staff at the St. Louis Downtown Airport as well as for other groups located at the airport.

Many of the youngsters were Girl Scouts Saturday, and they and other young people ages 8 to 17 were given the opportunity to go for ride in a plane, use flight simulators provided by St. Louis University Parks College of Engineering, Aviation and Technology, explore the Greater St. Louis Air and Space Museum exhibits, and learn about aviation careers and opportunities. 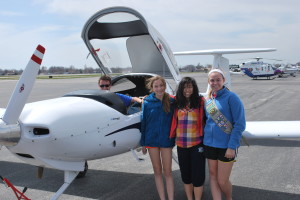 Flying in a small plane for the first time is something most kids and teens will never forget. When asked to rate her flight on scale of one to 10, Jackie replied, “10,000! Best day of my life.”  Jackie and her two friends, Jessica, and Natasha belong to Girl Scout Troop 2625. They are all freshmen at Ladue Horton Watkins High School.

Jessica said she was not nervous at all even though the winds were strong on Saturday. The winds were gusting so much the pilots had to stop offering the free flights.

Natasha was excited about her flying experience and said she now wants to become a pilot as a hobby. All three teenagers agreed that they wanted to fly again.

Some older scouts, ages 14 to 21, also participated in the event.

Three Saturdays earlier on March 16, the Boy Scouts were learning about aviation at St. Louis Downtown Airport. Aviation Day gave 140 Scouts from St. Louis Lutheran Council of Boy Scouts the opportunity to earn their Aviation Merit Badges through first-hand experiences. Like the Girl Scouts, the weather also played a role in cancelling the free flights for the scouts that day as well, after only five scouts got to fly. The cloud ceiling was declared too low and visibility not good enough to fly safely. 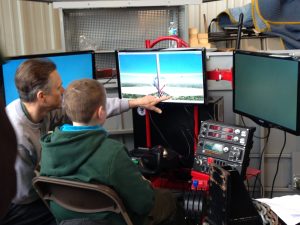 Scouts got the opportunity to use flight simulators.

The scouts participated in activities including constructing a flying aircraft model, piloting professional pilot training flight simulators, taking a flight in an aircraft, viewing aviation exhibits at the Greater St. Louis Air & Space Museum, and listening to presentations given by professionals in the aviation industry.

Jerry Wade, one of the volunteer pilots on March 16, has been flying for 44 years. He says that youth aviation events are important to the industry.  “I like to share it (aviation) with the young kids,” Wade told me. “I think by doing that you are going to promote aviation and the industry certainly needs that.”  Wade told me that participating in events like this is extremely rewarding, and the best part about flying.

The experience was also rewarding for the scouts. James and Alex told me they came to get their Aviation Badge of course, but REALLY wanted to get up in a plane. “The experience was amazing!” James told me. “Everything looks like a toy set when you are up there.” Not only did the two boys get their Aviation Merit Badge, but they marked a personal milestone as well. “It was my first time in the air at all,” Alex said. “Yea first time in the air at all!” echoed James.

The pilots enjoy sharing their love of flying with the young aviation enthusiasts.

3 thoughts on “Youth Aviation Programs At St. Louis Downtown Airport Rewarding For Girls and Boys And All Involved”