This year we are hosted a bracket challenge to narrow down your favorite MetroLink Stations and Transit Centers.

Voting in the final round ended on Tuesday, March 29. And the winner is…. Central West End! 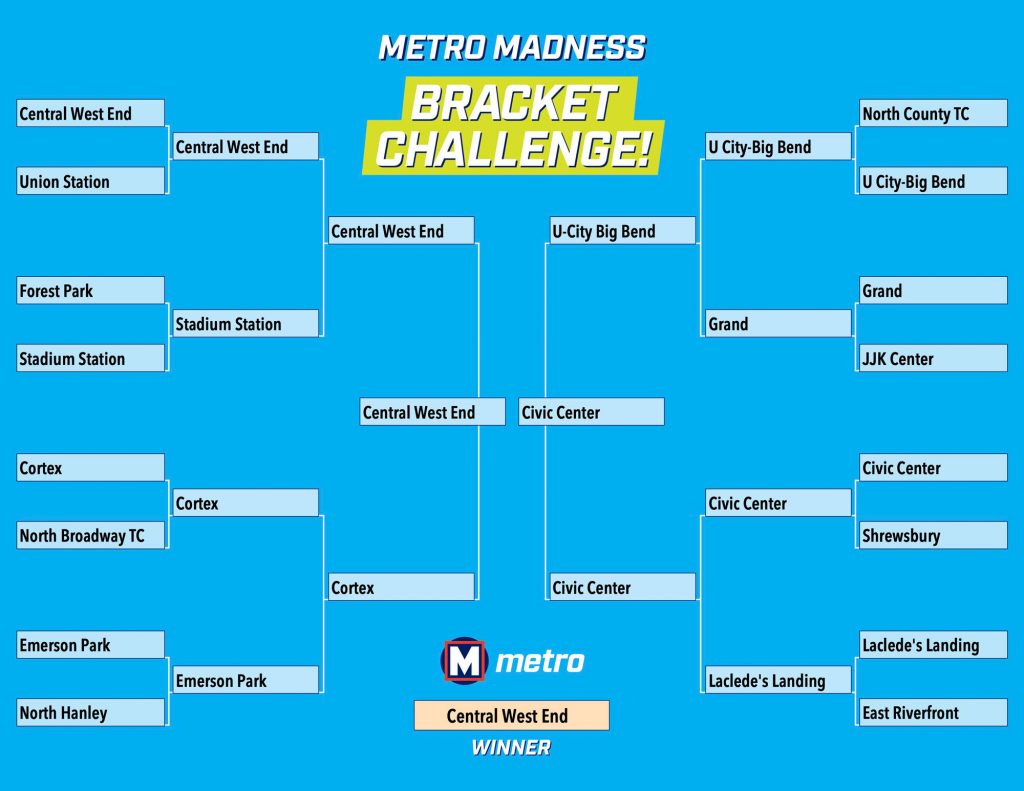 You can learn more about each of these stations below. The Central West End MetroLink Station is the busiest station across the entire 38-station light rail system, serving one of the region’s most unique neighborhoods and popular healthcare destinations. The station also offers some of the newest amenities available, including a new elevator, improved lighting, new platform canopy and entrance plaza, having recently completed a $7.5 million improvement project funded by BJC Healthcare and Washington University School of Medicine. 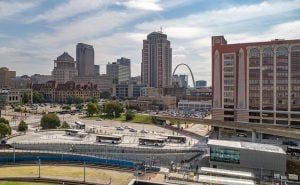 The Civic Center Transit Center is the downtown hub for Metro Transit, with connections to MetroLink, more than a dozen MetroBus routes, and it’s adjacent to Amtrak and Greyhound service at the St. Louis Gateway Transportation Center. The transit center was completely reconstructed in July 2017, and offers an indoor, climate-controlled waiting area, public restrooms, bus shelters and can accommodate 60-foot articulated buses and electric buses. 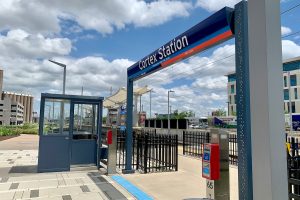 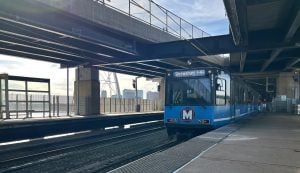 The East Riverfront MetroLink Station is perhaps the most scenic station on the MetroLink system, located on the beautiful Eads Bridge with great views of downtown St. Louis and the Gateway Arch. Located on the Illinois side of the river near the Casino Queen, it offers direct access to the pedestrian walkway on the top of the Eads Bridge and is a favorite station for Cardinals fans who, instead of paying stadium parking, will park at the station and ride the train direct to Busch Stadium. 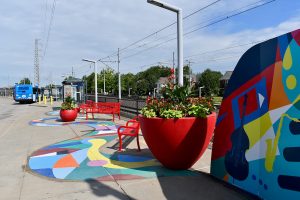 The Emerson Park Transit Center is one of the most popular transit destination in Illinois, serving MetroLink and both MetroBus and Madison County Transit bus routes. The station opened in May 2001 as one of eight new stations developed as part of the St. Clair County MetroLink Extension, and features more than 800 free parking spaces and 25 long-term parking spaces. It looks better than ever too, with a recent transformation that makes it colorful, inviting, interactive and vibrant. 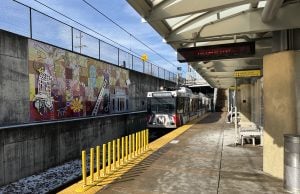 The Forest Park-DeBaliviere Transit Center is the linchpin of the MetroLink light rail system, connecting the Red Line and Blue Line MetroLink stations to the west to the system’s core and stations to the east in Illinois. It is one of the original MetroLink stations that opened in 1993, and was originally a double platform station instead of today’s center platform design. It sits at the north entrance to Forest Park, and will soon be neighbors to one of the region’s most exciting TOD projects. 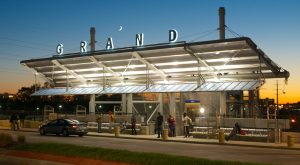 The Grand MetroLink Station is not only a popular light rail station, it also serves the region’s highest ridership MetroBus route, the #70 Grand. It is one of the original MetroLink stations that opened in 1993, the station opened in August 2012 after a complete redesign that includes transit plaza improvements, new weather shelters, seating, on-bridge improvements, an exciting new public art installation and a free 58-space Park-Ride lot – the closest to downtown St. Louis. 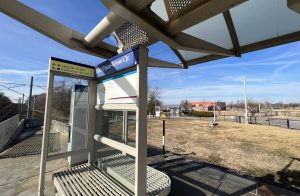 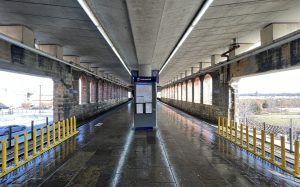 Located on the Missouri side of the Mississippi River, the Laclede’s Landing MetroLink Station competes with its sister station across the river, the East Riverfront Station, for the most scenic views. Located within the beautiful Eads Bridge, riders get wonderful view of the Gateway Arch and downtown St. Louis through the bridge’s arched openings, and they get direct access to the historic Laclede’s Landing district and to the Gateway Arch National Park. 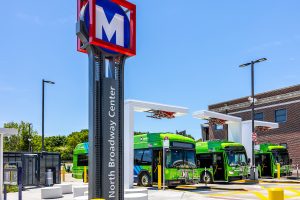 For most of its history, the North Broadway Transit Center served as a small, but important, transit hub located just north of downtown St. Louis. But in June 2021, it opened up a tremendous upgrade: electric bus chargers. Today, it supports Metro’s new electric bus fleet, allowing both 40-foot and 60-foot electric buses to charge while they are in service. The North Broadway Transit Center represents the future of transit in the St. Louis region. Opened in March 2016, the North County Transit Center is a key transit hub for North St. Louis County, one of the region’s fastest growing markets. It is one of the transit system’s premier facilities, with a large indoor, climate-controlled waiting area, public restrooms, 24/7 security, digital arrival time display boards, canopy-protected exterior bus bays and a free Park-Ride lot. And, it is one of the best looking transit centers in town. 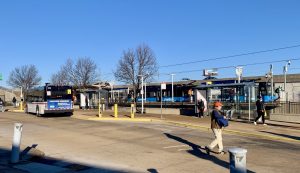 The North Hanley Transit Center is one of the region’s most popular transit destinations, serving MetroLink and more than ten MetroBus routes. It is one of the original 16 MetroLink stations that first opened in 1993, serving as the westernmost station for the new light rail system until expansion to St. Louis Lambert International Airport in 1994. While it may not be as flashy as other stations, it has been a solid, reliable workhorse for almost 30 years. 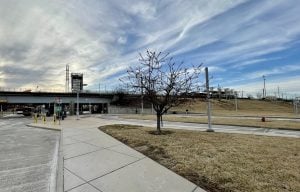 The Shrewsbury-Lansdowne I-44 Transit Center has the distinction of being the western terminus for Blue Line MetroLink service – and having the longest official name of any transit center. Opened in August 2006 as part of the Cross County MetroLink Station, it serves MetroLink and nine MetroBus routes, has a large free Park-Ride lot with 25 long-term parking spaces, and is currently our southernmost MetroLink station. The Stadium MetroLink Station has a split personality. Sometimes, it is one of the system’s quieter stations, providing visitors and others with easy access to downtown St. Louis. But for seven months out of the year, it is bustling with energy and excitement as the destination for tens of thousands of baseball fans looking to enjoy all the action and fun of the St. Louis Cardinals, Busch Stadium and Ballpark Village. 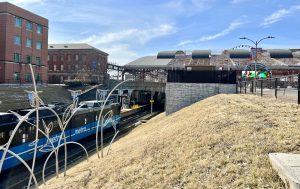 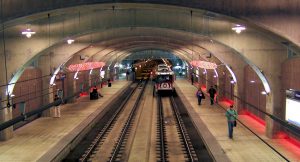 The 46-mile, 38-station MetroLink light rail system has several stations at street level, and some elevated – but there’s something special when it comes to underground train stations. And our favorite is the University City-Big Bend MetroLink Station. Opened in August 2006 as part of the Cross County MetroLink Extension, the UC-Big Bend Station has a sleek, modern look inside of the longest tunnel on the light rail system.