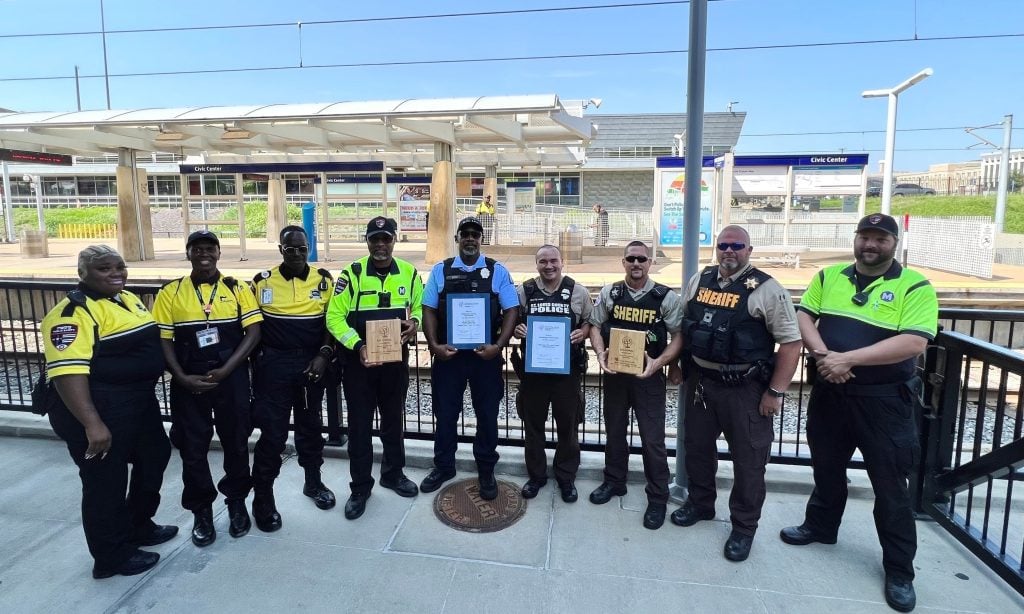 Metro Transit and its law enforcement and security partners won two top national security awards at the 2022 US Outstanding Security Performance Awards (OSPA) in Atlanta in September. The Metro Transit Public Safety Department, its law enforcement partners and security contractor emerged as winners in the categories of Outstanding Security Partnership and Outstanding Security Team within the United States. Metro Transit and its partners also were named as a finalist in a third separate category for outstanding security training. Now in its seventh year, the US OSPAs are part of an independent global awards program that serves to highlight the best companies, people, projects and technologies that have made a significant contribution in safeguarding people, places and property from all areas of potential crime and disorder. Those selected as winners went through a rigorous and robust independent judging process.

“These awards belong to the women and men who are out there tirelessly on the Metro system every single day working to create a safer, more secure transit environment for our customers,” said Kevin Scott, General Manager Security for Bi-State Development. “Team members from Metro Public Safety, our law enforcement partners and contracted security are united on the front lines making a difference and their commitment is reflected in this special recognition.”

The Outstanding Security Partnership Award honors an organization that has developed successful partnerships with outside resources to better secure a safer environment for its clients. The award recognizes the partnership and collaboration between the Public Safety team for MetroLink and MetroBus, Allied Universal (contracted security officers) and the Regional Metro Transit Task Force, which includes officers from the St. Louis County Police Department, St. Louis Metropolitan Police Department and St. Clair County Sheriff’s Department. Metro Transit also has additional agreements with the task force members and the City of St. Louis Sheriff’s Office to provide secondary officers to assist contracted officers and public safety team members.

The collaborative relationship forged between these various entities earned a spot in the winner’s circle for 2022. Working together, with a focus on excelling as a leader in the public transportation arena, the team focused on the areas that were most likely to provide current and future riders with a feeling of safety and a secure environment. Visibility, rule enforcement, innovation and infrastructure have proven to be the keys to the comprehensive security program. CPTED and technology, including CCTV monitoring, are other tools that are critical to the success Metro Transit is seeing.

The Outstanding Security Team Award recognizes an organization that has the best implemented team approach against various threats targeted towards the organization or its users. OSPA judges were especially impressed by the excellent client and relationship engagement demonstrated by the Metro Transit Public Safety team and the Allied Universal team. Major changes implemented through the collaboration have helped turn around perception of MetroLink security, reduced crime on the transit system, and brought innovative approaches to securing public transit systems. In addition, security professionals and fare enforcers are teamed up on occasion with police officers to patrol the MetroLink system and that has contributed to a 67% drop in incident rates as a result of the proactive policing. The Allied Universal team also is working closely with Metro Transit on the design and implementation of a Secure Platform Plan, which will transform MetroLink from an open-access light rail system into a closed-access system.

“These awards validate that the progress our teams are making is very real,” said Taulby Roach, Bi-State Development President and CEO. “We couldn’t be prouder of all our security team members, internal and external, who are delivering the safe, positive transit experience our riders expect and deserve.”

OSPA is an independent global award organization headquartered in the United Kingdom. The OSPAs are awarded in 15 countries around the world and are viewed as one of the most prestigious accolades a security company or professional can be awarded.