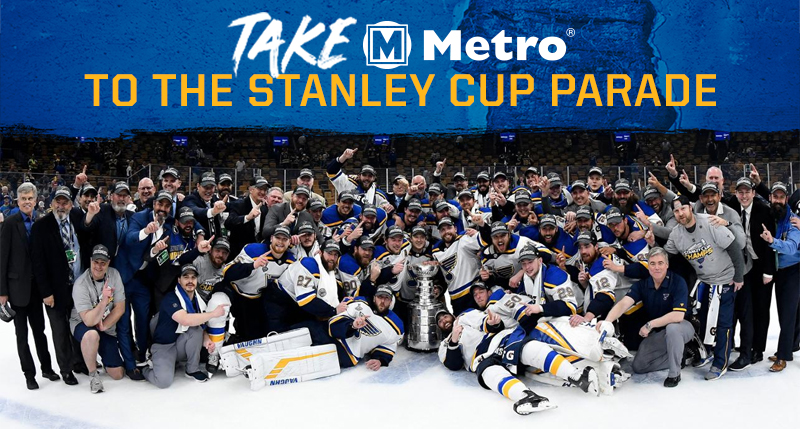 MetroLink will have extra trains ready to go on Saturday as hundreds of thousands of Blues fans head downtown to celebrate with the Stanley Cup Champions, the St. Louis Blues.

With five downtown MetroLink stations a block or two away from the Stanley Cup Parade, MetroLink is the perfect option while avoiding road construction, traffic and parking issues.

On Saturday, MetroLink will operate its normal weekend schedule, and will add extra trains to match passenger volumes.

Due to the large crowds anticipated on Saturday, you should expect trains to be crowded. Metro will have extra security, additional personnel and volunteer employee ambassadors available throughout the MetroLink system to assist you. Metro Transit’s law enforcement partners at the St. Louis County Police Department, Metropolitan St. Louis Police Department and St. Clair County Sheriff’s Department will also have extra officers available.

Parade Details and Nearby MetroLink Stations

The Stanley Cup Parade starts at noon at 18th and Market Streets and ends at Broadway and Market. The parade will be followed by a rally at the Gateway Arch grounds. Nearby MetroLink stations include:

Park at any one of 21 free Park-Ride lots at MetroLink stations, and take advantage of more than 10,000 free parking spaces in the bi-state area. Large number of parking spaces can be found at the following transit locations:

MetroBus is another convenient option. Ride on any one of 18 MetroBus routes to the Civic Center Transit Center and walk a few blocks north to the event site. Please note there will be several MetroBus routes will be detoured in downtown St. Louis due to street closures. The #99 Downtown Trolley will be out of service on Saturday from 10 a.m. until festivities conclude in downtown.

To plan your trip to the Stanley Cup Parade and Celebration:

1 thought on “Ride Metro to the Stanley Cup Parade”