Our transit experts can help you plan a trip and explore all of the new routes and options available to you.
Call: 314.231.2345
Text: 314.207.9786
Email: transitinformation@metrostlouis.org
Web Chat: Click on the red chat icon in the lower right corner 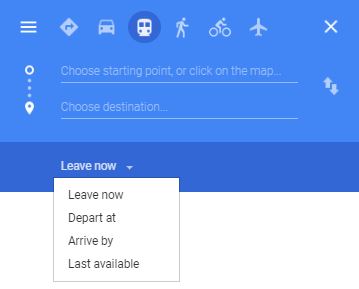 Plan your new MetroBus commute on Google Maps. Simply enter your trip, select the transit icon at the top, and change your option from Leave Now to Depart At. Change the date to September 30 (or later) and Google will plan your trip using the new MetroBus routes and schedules.

You can get ready for the new MetroBus service plan, right from your mobile device with Transit – Metro’s official app.

There are two ways to use Transit to plan your new Metro Reimagined commute. First, when you plan your trip, change the Leave Now option to September 30 (or later) and Transit will use the new MetroBus routes and schedules.

You can also use Transit’s special trip-planning tool. Open the Transit app and tap on settings (the gear icon, top-left corner). Then tap the middle slider icon at the top of the screen, and under Bus, turn off MetroBus Missouri and turn on Metro Reimagined (like above).

Transit will now show you what MetroBus will look like beginning on September 30. You will be able to see new schedules, new route maps and plan new commutes using Transit.