Update: This work has been postponed due to the historic flooding in the region, and will begin on Monday, August 1. 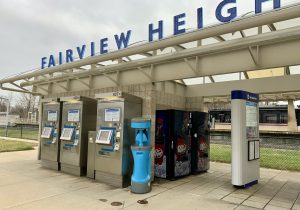 If your commute includes MetroBus connections at the Fairview Heights Transit Center, you will need to board your bus at a different location at the transit center for the next few weeks as construction work will require the temporary relocation of the bus bays.

Beginning at 8 a.m. on Wednesday, July 27, the bus bays at the Fairview Heights Transit Center, located on the south end of the west Park-Ride lot, will close for approximately two weeks to accommodate the resurfacing of the Park-Ride lot and bus lane.

During this construction work, the #1 Main Street-State Street, #12 O’Fallon-Fairview Heights and #13 Caseyville-Marybelle MetroBus routes will serve new, temporary bus bay locations at the Fairview Heights Transit Center on the south end of the east Park-Ride lot, located just east of the transit center’s MetroLink platform. Signage will be installed at the transit center to help direct you to the temporary bus bay areas. The schedules for all three MetroBus routes will not be affected by these changes.