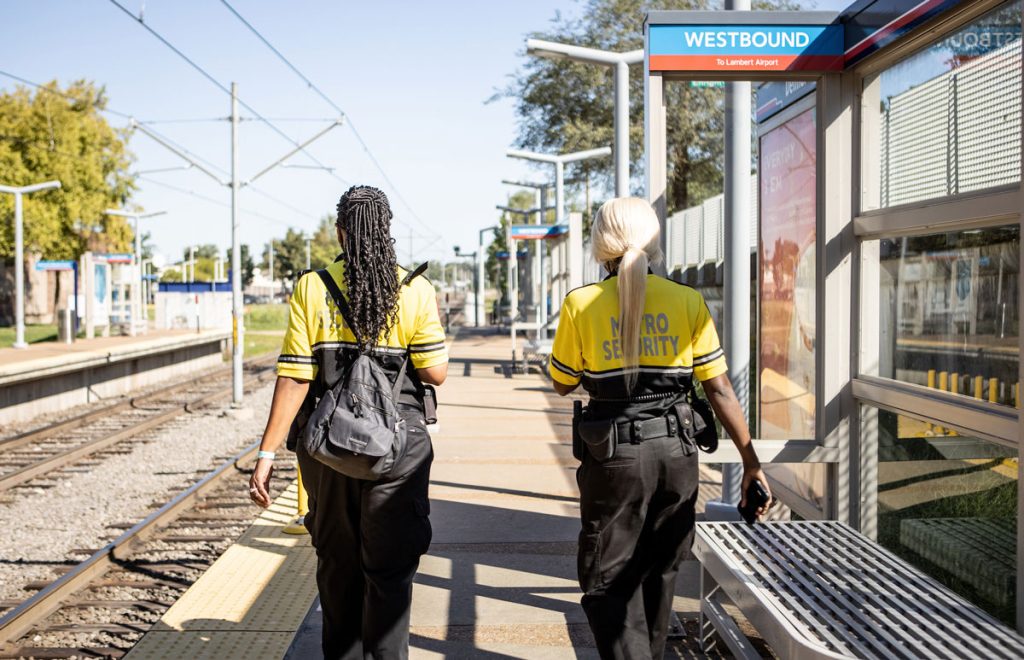 In September 2019, the complete transformation of the safety and security program for the Metro Transit system got underway. MetroLink is a 46-mile light rail system serving 38 stations in two states, and MetroBus serves 59 bus routes in a 550 square mile area, which includes the City of St. Louis and St. Louis County in Missouri and St. Clair County in Illinois. Under the leadership of Kevin Scott, general manager of security for Bi-State Development, and with guidance from a transit security consultant, a three-tiered approach to security was developed, encompassing industry best practices, zoned deployments and clearly defined roles and responsibilities for each component. The approach served as the foundation for the safety and security improvements now being recognized in this year’s OSPA.

“After working for more than two years on enhancing the safety of our transit system for local commuters, this recognition as a finalist in several categories through the Outstanding Security Performance Awards is a testament to the fact that the progress we are making is very real.” – Taulby Roach, Bi-State Development President and CEO

The Outstanding Security Partnership Award honors an organization that has developed successful partnerships with outside resources to better secure a safer environment for its clients. St. Louis MetroLink-MetroBus Public Safety, Allied Universal and the Regional Metro Transit Task Force were jointly nominated in this category. They landed a spot on the finalists list for the collaborative relationship forged between Metro’s in-house team of Transit Security Specialists (TSSs), contracted security professionals from Allied Universal (formerly G4S) and law enforcement partners from the Regional Metro Transit Task Force. Working together, with a focus on excelling as a leader in the public transportation arena, the team focused on the areas that were most likely to provide current and future riders with a feeling of safety and a secure environment. Visibility, rule enforcement, and innovation and infrastructure have proven to be the keys to the comprehensive security program. CPTED and technology, including CCTV monitoring, are other tools that are critical to the success Metro Transit is seeing.

“Our team at Metro Transit deserves to be recognized for proving that a strong relationship between contract security, in-house security, and law enforcement can have a massive impact when it comes to making our community safer when using our regional public transportation system,” said Scott. “With an incident rate of 11 incidents per 100,000 boardings, Metro rivals some of the safest communities in the country when it comes to crime. Considering a portion of those incidents are actually quality of life issues such as smoking on the platform, or playing loud music, it is easy to see that this partnership is working.”

The Outstanding Security Team Award recognizes an organization that has the best implemented team approach against various threats targeted towards the organization or its users. In April 2020, Metro Transit implemented the final step of its complete security makeover by contracting with Allied Universal for platform guards and fare enforcement officers. Allied Universal Account Manager Billy Reynolds and Operations Manager Steve Graeser worked to identify issues that needed to be addressed and offer suggestions to correct the issues and a plan to implement them. Among the changes implemented was a shift from static patrols to rotating posts allowing the security professionals, who were very visible due to their bright colored uniforms, to spend time on different light rail vehicles and train platforms, patrol Metro property, and positively engage with riders. In order to gain the confidence of MetroLink customers, security professionals received additional training in de-escalation techniques and customer service. Weekly meetings with Metro management and law enforcement helped ensure any changes needed to the security plan would be determined using a team approach. The Secure Trax reporting system used by Allied Universal staff not only allowed security professionals to upload incident reports, but also provided management and Metro leadership with real time proof of presence during guard tours.

Reynolds, a former police officer, has worked closely with the Metro Regional Transit Task Force, which is comprised of police officers from St. Louis County Police Department, St. Louis Metropolitan Police Department, and St. Clair County Sheriff’s Department. Having police officers patrol on occasion with security professionals and fare enforcers contributed to the drop in incident rates, with 67% of those incidents the result of proactive policing. The Allied team also is working closely with Metro Transit on the design and implementation of the Secure Platform Program, marking the first time a proof-of-fare transit system will transition to a closed system in the United States. These major changes are what garnered the MetroLink St. Louis Team and Allied Universal, a finalist position in this specific category.

The Outstanding Security Training Initiative Award is given to a company that has the most efficient training program that promotes outstanding performance and has produced remarkable results from its employees. The Metro Public Safety Department captured a finalist spot in this category for its successful Overdose Response and Understanding Human Trauma Program. Developed in 2021, the program helps address increasing issues of escalated violence on the system, concerns regarding transient individuals, persons with mental illness, the increasing opioid problem and overdose deaths. A two-pronged training effort was established.

First, Metro wanted to look at the issue of mental illness and trauma. The transit agency connected with a local mental health provider to create an eight-hour training course that would help educate frontline team members on human trauma – in a way that helped them understand how trauma affects everyone as individuals and how that can assist in de-escalation. Personnel performance in de-escalation has been remarkable in the wake of the training.

Secondly, the team wanted to make sure staff could respond quickly and adequately, to assist with the growing number of overdose events on the transit system. Through a partnership with University of Missouri–St. Louis (UMSL) and the Missouri Institute for Mental Health, they have been able to secure training on response and overdose education. These partners also serve as Metro’s supply source for Naloxone through their program. The entire security team (Transit Security Specialists – TSS) completed the program and every team member now carries an overdose response kit on them. A year into the Overdose Response program, Metro Transit has helped save nearly 30 lives and the program is offered company-wide, with other transit groups around the country reaching out to learn how they could deploy a similar program.

“After working for more than two years on enhancing the safety of our transit system for local commuters, this recognition as a finalist in several categories through the Outstanding Security Performance Awards is a testament to the fact that the progress we are making is very real,” said Taulby Roach, Bi-State Development President and CEO. “I couldn’t be prouder of our internal public safety team and our partners who help make our system safer every day and deliver the positive transit experience our riders expect and deserve.”

OSPA is an independent global award organization headquartered in the United Kingdom. The OSPAs are awarded in 15 countries and are viewed by many as one of the most prestigious accolades a security company or professional can be awarded. This year’s winners will be announced on September 13 in Atlanta Georgia.