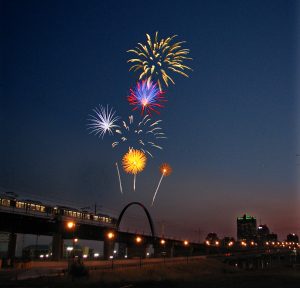 As part of the region’s 4th of July celebrations, downtown St. Louis will host the America’s Birthday Parade on Saturday, July 3, and Fair Saint Louis Fourth of July Fireworks Spectacular on Sunday, July 4 – and Metro Transit makes it easy for you to get to the festivities! With more than 10,000 free parking spaces at 20 Park-Ride lots in Missouri and Illinois, five MetroLink stations serving downtown and MetroLink trains arriving and departing downtown St. Louis every 10 minutes, Metro Transit is a great option for families and visitors to join the celebration while avoiding street closures, heavy traffic and parking hassles.

Remember, due to a federal mandate from the Transportation Security Administration (TSA), masks are still required while riding MetroBus and MetroLink, and while at MetroLink stations and Metro Transit Centers.

This patriotic parade begins at 10 a.m. at Broadway and Market Street in downtown St. Louis, and proceeds west on Market to Union Station – featuring an elaborate spectacle of floats, balloons, marching bands and live performances. You will also get to see one of Metro Transit’s new 60-foot battery electric buses in the parade!

Parade-goers can ride MetroLink to the Union Station, Civic Center, Stadium or 8th & Pine MetroLink Stations, which are all near the parade route. MetroLink trains will operate on a weekend schedule on Saturday, and both eastbound and westbound trains will arrive in downtown St. Louis every 10 minutes.

MetroBus is another great option to enjoy the parade. Visitors can ride on any one of more than a dozen MetroBus routes to the Civic Center Transit Center, which is located just a couple blocks south of Market Street.

Metro Transit is the best option for families and visitors to enjoy what is being billed as the largest fireworks display ever. The fireworks show begins at 9:40 p.m. along the riverfront, and can be easily accessed from the Convention Center and Laclede’s Landing MetroLink Stations.

Metro Transit and Metro Public Safety personnel will be located throughout the transit system on July 3 and July 4 to assist passengers. Trains may be crowded, especially after the fireworks show, and we ask you to be patient and respectful of others. As a reminder, alcohol and firearms are prohibited on Metro Transit vehicles and property, and food and drinks are not allowed on trains or buses.

To help reduce wait times, we encourage you to purchase two one-ride tickets for $5 or a $5 Metro Day Pass (which provides unlimited MetroLink and MetroBus rides for an entire day) while on your way to 4th of July festivities. These fares can be purchased in advance using the Transit app and also at Ticket Vending Machines located at every MetroLink station. In addition, ticket agents will be at the North Hanley, Brentwood I-64, Shrewsbury-Lansdowne I-44, East Riverfront and Fairview Heights MetroLink Stations on July 3 and 4 to assist passengers.

Per federal mandate from the Transportation Security Administration (TSA), masks are required while riding MetroBus and MetroLink, and while at MetroLink stations and Metro Transit Centers.

MetroLink riders are encouraged to avoid the 8th and Pine Station this weekend because the westbound escalator at the station will be out of service on July 3 and July 4. The station’s westbound elevator will be in service, but the accessible pathway from the elevator is currently unavailable, making it necessary for riders to use stairs when entering or leaving the westbound side of the station. Riders who are unable or find it difficult to use stairs are encouraged to use other downtown MetroLink stations when traveling to or from 4th of July festivities.

To plan your trip to the America’s Birthday Parade or Fourth of July Fireworks Spectacular, use the online Trip Planner or check transit schedules and maps at metrostlouis.org , download Transit app to your mobile device to plan your trip and pay your fare, or contact Metro Transit Information at 314-231-2345 (phone) or 314-207-9786 (text), available 7 a.m. to 6 p.m., Monday through Friday.