The elevator at the Central West End MetroLink Station will be closed for several months beginning on Thursday, December 26, to accommodate demolition crews and reconstruction of the elevator during a station improvement project which includes new features and amenities to improve service and safety. The platform at Metro Transit’s busiest MetroLink station will remain open during construction.

MetroLink riders will be able to get to or exit the Central West End MetroLink Station platform from an accessible walkway, located at the east end of the platform, which connects to the MetroBus Transit Center. A shuttle van will be available to transport passengers with mobility or medical issues who are unable to navigate the stairs. The shuttle will operate between a stop west of the intersection of Children’s Place and South Taylor Avenue and a stop just north the station’s western platform entrance. Signs and information will be installed at the station to help customers access the shuttle. 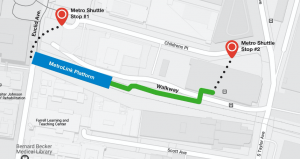 Throughout the project, temporary modifications and closures will be made to the station entrances/exits to enable MetroLink riders to safely access the MetroLink platform. Advance notice will be provided for MetroLink riders if temporary platform closures or service interruptions are required.

This construction project will bring $7.5 million in enhancements to the Central West End Station, funded by Washington University School of Medicine and BJC Healthcare, in partnership with Metro Transit.