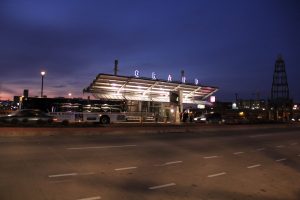 [ST. LOUIS, MO/November 14, 2022]  The southbound elevator at the Grand MetroLink Station will be out of service for maintenance beginning on Tuesday, November 15. This work is expected to be completed by Saturday, November 19. During this period, passengers will need to use the staircase on the west side of Grand Avenue to move between the Grand MetroLink Station on Scott Avenue and the MetroBus stop on the Grand Bridge that serves the southbound #70 Grand MetroBus route.

For customers who require an elevator to transfer between MetroLink and the bus stop on the Grand bridge:

Customers who have questions or would like assistance navigating around the temporary elevator outage are encouraged to contact Metro ADA Services at 314.982.1525 or adacoordinator@metrostlouis.org.