Were you able to guess the place and year of today’s Flashback photo? You are looking at a streetcar (middle) heading a line of eastbound cars on Olive at Sixth Street on Feb. 22, 1947. The old Famous and Barr store is on the right.

Did you know… Earlier that month, the first ever television broadcast occurred in St. Louis. According to the St. Louis Post-Dispatch, “…the gaggle in the lounge at the Hotel Statler, 822 Washington Avenue, got the nod as “most exuberant” when the small glass screens glowed with images of an American flag, accompanied by the sound of the national anthem. The first regular television broadcast in St. Louis began patriotically at 2:30 p.m. on Saturday, Feb. 8, 1947, over the weak airwaves of KSD-TV. For 90 minutes, the live in-studio program included dance demonstrations and an interview of Cardinals catcher Joe Garagiola by Post-Dispatch sports editor J. Roy Stockton.” 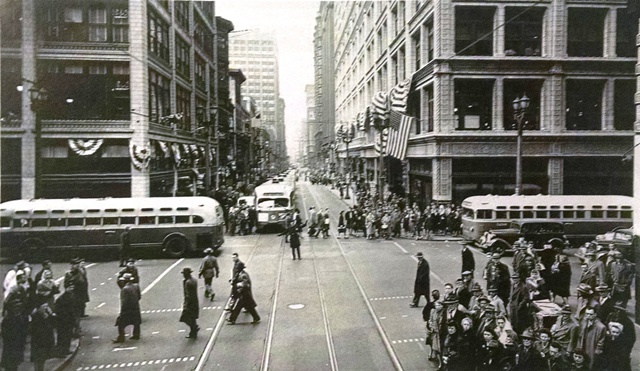