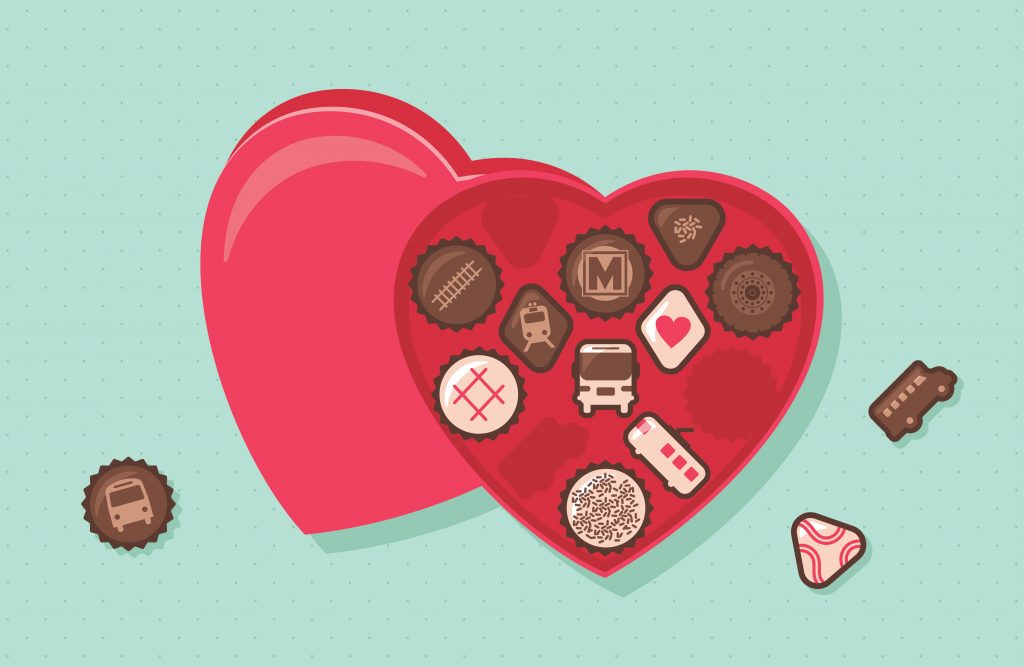 Metro Transit is teaming up with Citizens for Modern Transit (CMT), the MetroLink Police Unit, St. Clair County Transit District and the University of Missouri-St. Louis to share the love on Valentine’s Day.

From 6:30 a.m. to 8 a.m. on Thursday, February 14, Metro ambassadors, police officers, Metro Transit security officers and others will be at 14 Metro Transit Centers to greet you and give away Valentine’s Day candy. Your commute may get even sweeter because some of the candy boxes will have a free 2-hour pass, a one-day pass, a weekly or a monthly transit pass attached.

“The goal behind this effort is simple – we want Metro Transit riders to know we appreciate them, while raising awareness about the many benefits of public transit,” said Taulby Roach, President and Chief Executive Officer of Bi-State Development. “We show this appreciation by providing customers what they want, not only a safe ride, but a comfortable ride – a ride where they can use the time on our system to return emails, read a book, or sit back and relax.”

‘Wake Up to a Sweeter Commute’  locations

“A safe, reliable public transit system also plays a key role in stimulating economic development, attracting and retaining business, establishing healthier communities, connecting individuals to job opportunities, furthering equality, and building sustainable communities,” said Kimberly Cella, Executive Director of CMT. “We have a very solid system in our region, and the ‘Wake Up to a Sweeter Commute’ events are a fun way to recognize this and reinforce why so many are crushing on transit.”