Today’s photo depicts two streetcars (or is it one streetcar and one trolley?) at the Wellston Loop in 1947. At the time, three streetcar lines converged on this loop located at Hodiamont and Dr. MLK Dr. (then Easton) – the 16 City Limits, the 32 Wellston and the 65 Woodson Road line. The tall building at right is no longer standing.

Is there a difference? Technically, no. Both refer to a transit vehicle system which uses trolley poles to get power from an overhead wire. For some, trolley is an older American term that is commonly used to describe older cars, say, the car on the right. Streetcar is used to describe the mid-century models of cars. Hence, the new project in the U. City Loop uses “trolley” since it will use replicas of the older models.

Interestingly, the root of the word trolley likely evolved from the phrase, “to roll,” according to the Online Etymology Dictionary. 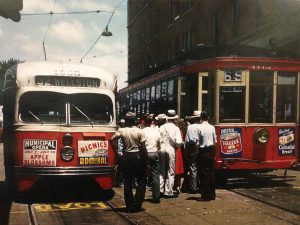