In celebration of Valentine’s Day, we’re sharing the stories of couples who met on MetroBus or MetroLink. This week’s Passenger Profile features our first couple, Kristen and Chris.

Fifteen years ago, Kristen and Chris were just two MetroLink passengers who rode the same train to work every day, but whose paths never crossed. Little did they know that fate would change their lives forever in the fall of 2001, with a little help from a matchmaker – a common friend. 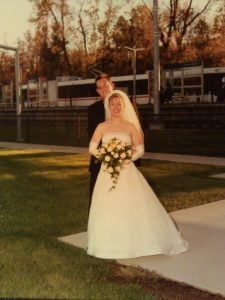 work, and they would both get off at the Union Station MetroLink Station.

One day in October 2001, Kristen happened to ask Corey if he knew of any single guys that might be a good match for her. Riding MetroLink with his two friends every day, Corey couldn’t help but suggest Chris. Corey gave her Chris’ email address, and the two soon started exchanging emails. Emails quickly turned into dates to Cardinals and Rams games. Those dates turned into trips to meet each other’s parents for dinner and family gatherings.

“We were inseparable,” Kristen said.

After dating for just over a year, Chris knew it was meant to be. He asked Kristen’s father for permission to take his daughter’s hand in marriage. Not only did her father agree, but he also offered Chris the engagement setting he gave to Kristen’s mother, who had passed away from cancer years earlier. The setting is a small remembrance that her mother is always with her. All Chris would need to do is find that special diamond to reset the cherished keepsake.

Then came the big day, November 8, 2002. Chris met Kristen in the parking lot of the Fairview Heights MetroLink Station. Without saying a word, he started playing “Will You Marry Me” by Alabama and began to dance with his sweetheart. Throughout the song, Kristen kept wondering what was wrong. When it ended, Chris knelt on one knee, looked into Kristen’s eyes, pulled out the ring and sang the last line out loud, “Will you marry me?” 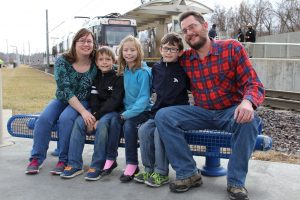 “I’m never going to forget that moment,” she said.

If it hadn’t been for MetroLink and their friend Corey, Kristen said she probably would have never met Chris. Luckily, fate has a way of working it out in the end.

On October 18, 2003, Kristen and Chris were married and, once again, MetroLink played a part – albeit a smaller one. One of their wedding photos includes the Fairview Heights MetroLink Station as a backdrop.

Today, Kristen and Chris have three beautiful children: Allison, Ronald and Roy. And just like their parents, they like riding the train.